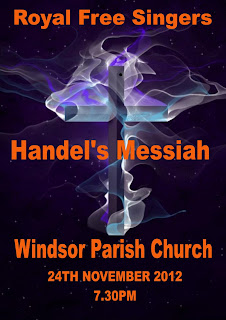 Handel's Messiah needs little introduction, being one of his most well known and well loved choral works. Numerous performances and 'Come and Sing' opportunities have made this a particular favourite with choirs and audiences alike. Handel composed 'Messiah' in 1741 based on the libretto by Charles Jennens, who edited Shakespeare's plays. This performance gave the audience a chance to hear this marvellous work again, or perhaps to hear it for the first time, performed by the Royal Free Singers, with a professional orchestra and soloists: Bruce Russell, Alexander L'Estrange, Nick Pritchard and Jenny Stafford.

Ben Gunner, our conductor, was delighted by the choir's performance:
It was great last night – you upped everything and you must and should feel very pleased with yourselves.  Members of the orchestra and soloists commented what an excellent sound you produced and what an exciting and rhythmic performance It was.  Other remarks to me from both the choir and audience alike included such words as 'fantastic night', 'excellent  Messiah', 'terrific Messiah', 'very exhilarating' and I too thought you were positively fizzing.  So, very well done. You brought so much pleasure to so many people last night, not least me.

Zimbe! and A Little Jazz Mass 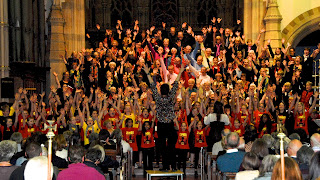 ZIMBE! Sing the songs of Africa
23 June in Windsor Parish Church
The Royal Free Singers’ sell-out summer concert  with Dedworth Middle School Choir, the G:Force Gospel Choir, from Formby School, Lancashire and the Call Me Al Jazz Quintet was a memorable and uplifting event for all who performed and attended. The performance of Zimbe! a brilliant fusion of traditional African song and jazz, completed a full programme of African, gospel and jazz music.

Zimbe! (the anglicised version of the Swahili word for “Sing them”) is a vibrant sequence of twelve African songs imbued with the spirit, energy and simplicity so typical of the African tradition.  It includes simple children’s playground songs from Ghana and Zimbabwe, a Xhosa lullaby, a rousing drinking song, and music for religious occasions. Alexander L'Estrange is the composer and we were privileged to have him conduct this performance by the three choirs singing together.  See and hear more about Zimbe! on http://www.zimbe.net/.

The other major work in the concert, conducted by Ben Gunner, was Bob Chilcott’s A Little Jazz Mass, composed in 2004, which the Royal Free Singers enjoyed performing in 2008. It embraces a variety of Jazz styles: an easy tempo Kyrie, a Gloria with real swings, gentle laid back Sanctus building in volume through the Benedictus, culminating in a blues-inspired Agnus Dei – gorgeous, soulful music in an utterly original setting. This work is inspiring to sing and has now become a firm favourite of Royal Free Singers members.

Audience comments:
'Lovely concert - really uplifting! Thanks a lot and well done the cast of millions!'
“…… the concert on Saturday was incredibly inspiring and uplifting – we couldn’t sit still and wanted to get up on the stage with the singers – well done what a triumph.”

Some 60 or so Royal Free Singers with attendant 'groupies' landed in Budapest on June 1st, ready for our singing tour of Slovakia. Met by our wonderful tour guides, Martina and Lenka, our first stop was Kosice - where we booked into the Hilton for the first four nights of the tour, and then five nights in Banska Bystrica. We sang four concerts in beautiful churches (and enjoyed the standing ovations!); we went up mountains, into forests (narrowly missing a bear!), into caves, restaurants, bars and castles. Some of us loved the traditional slovak dumplings with special cottage cheese and bacon - others were less certain! There were many coach journeys, conversations, some truly dreadful singing on the coach - to contrast with the beautiful concerts, many loo breaks and lots of ice cream.

Musical highlights included Janacek's Otcenas - with lovely solos from our two star tenors, Richard and Peter - Lauridsden's O Magnum Mysterium and, of course, The Storm is Passing Over - with Linda Chanan conducting. 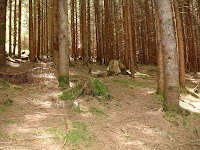 The last night party saw many choir members getting up for 'impromptu' solos and some very amusing group pieces. The hat dance, copied from a Slovakian dance seen earlier, ended in chaos, with some people playing less than fair!

Ben Gunner, our conductor and host, led the choir once more into unknown territory, giving us wonderful experiences in the sunshine and bringing us all back safely - into the rain!
Posted by Patty at 08:17 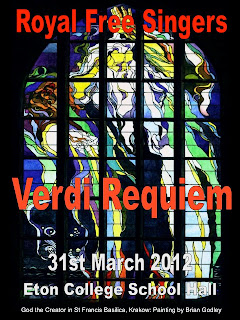 Audience comments:
'Stupendous performance'
'Really raised the roof!'
'So uplifting!'
'A particularly beautiful performance by soprano, Susan Piggott'
'Thank you and the Royal Free Singers for your splendid concert on Saturday,  I came with a co-Trustee of the Royal Albert Institute Trust, and we both enjoyed it enormously, and want to thank you all.  It is a wonderful and ambitious work to put on, and you certainly did it justice! '


Verdi, an ardent Italian nationalist, composed it in memory of the Italian poet, novelist and national hero Alessandro Manzoni, whose death in 1873 had greatly affected him. Although its first performance was in a liturgical setting (in St. Mark’s Church, Milan on the first anniversary of Manzoni’s death), it is unashamedly theatrical in style, described by a contemporary, the eminent conductor and pianist Hans von Bülow, as ‘Verdi’s latest opera, in church vestments’, and following its first concert performance at La Scala Opera House, it became an overnight sensation, with performances throughout Europe soon following. Its British premiere in May 1875 in the Albert Hall, was conducted by Verdi himself.


Some 60 or so members of the Royal Free Singers joined the Windsor and Maidenhead Symphony Orchestra and singers from the London College of Music to sing the last movement in Mahler's Symphony No. 2 at Eton College School Hall on March 10th.


The audience reaction at the conclusion of the piece was testament to the power of the performance, and the inspiration of Leon Gee, the conductor. Some of the comments afterwards were: 'Quite the most moving concert I've been to in years - I was moved to tears in several places' and 'Simply magnificent!'

It was a special occasion for the Davies family, with all four members on the stage: Eifion and Sharron on Double Bass, Ali playing Oboe and Cor Anglais, and Marilyn singing alto with the choir!

We were pleased to have the opportunity to work with Leon, whose charisma and energy encouraged us to give of our best.
Posted by Patty at 09:45