Concert cancelled. Please apply for refunds from your ticket provider 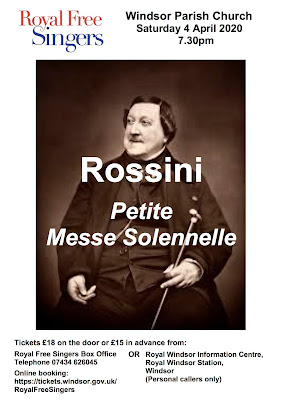 Born in 1792, Rossini had composed 36 operas and earned a fortune by the age of 37.  He then wrote almost nothing until, at the age of 55, he finally settled in Paris, where he produced a number of, mostly small, pieces that he famously described as his ‘sins of old age’.  Among these, though, was the Petite Messe Solennelle of 1863, a piece that is neither unduly solemn nor, other than in an affectionate sense, little.  As Rossini himself noted in the dedication on the score, “Good God, behold completed this poor little Mass … Thou knowest well, I was born for comic opera.  A little science, a little heart, that is all.”
Originally scored for two pianos and harmonium, Rossini re-scored it four years later for full orchestra.  However, it is the original version, which the Royal Free Singers will be performing, that has become  a key item in the choral repertoire, popular with choirs and audience alike.
Posted by Patty at 06:02 No comments: