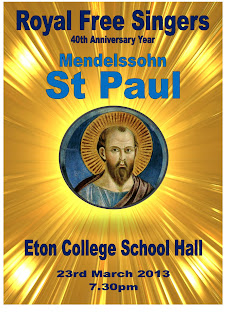 Felix Mendelssohn, born in 1809, was a German composer, pianist, organist and conductor of the early Romantic period. Recognised for his talent at an early age, he was instrumental in reviving interest in the music of JS Bach. Composition of his work 'Saint Paul' began in 1834, and it was premiered in 1836. His admiration for the work of Bach is evident in this work.


The text is based very largely on the Acts of the Apostles, with the three main themes being the martyrdom of St. Stephen, the conversion of St. Paul and the apostle’s subsequent missionary life. Mendelssohn, like St. Paul, was a convert from Judaism to Christianity so the text undoubtedly had a strong personal meaning for him.  Today St. Paul is performed less often than Elijah, but it ranks among the principal oratorios of the 19th century.
Now rarely performed, the Royal Free Singers provided a marvellous opportunity to come and hear this great oratorio, in the beautiful, historic surroundings of Eton College School Hall, conducted by Ben Gunner and accompanied by the Orchestra of London.

'A wonderful evening - why do we not hear this great work more often?'


The Royal Free Singers gratefully acknowledge the generous support of the Prince Philip Trust Fund and the Royal Albert Institute in staging this concert.
Posted by Patty at 11:44