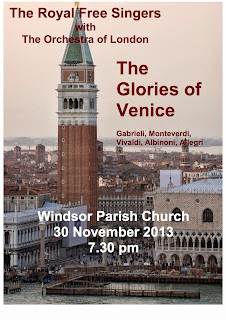 The Glory of Venice

To round off their 40th anniversary year, the Royal Free Singers gave a concert of 15th and 16th century music from Italy, featuring works by the Venetian masters Giovanni Gabrieli (O Magnum Mysterium and In Ecclesiis), Claudio Monteverdi (Beatus Vir), Tomaso Albinoni (Magnificat) and Antonio Vivaldi (Gloria), works which would undoubtedly have been performed in San Marco, making full use of its sonorous acoustic, and from Rome the celebrated Miserere by Gregorio Allegri.