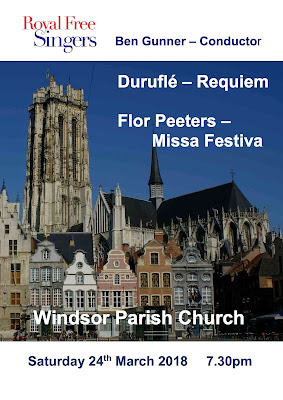 
Flor Peeters (1903-1986) was a professor at the celebrated Lemmens Institute music school in Leuven, and for the greater part of his life was organist at Belgium’s metropolitan cathedral, St. Rombout’s in Mechelen (pictured). Other posts held included organ and composition professorships at Tilburg and Antwerp Conservatories. Renaissance music, particularly the school of Flemish polyphony, was a significant influence on his own compositions, including the Missa Festiva, composed in 1947, perhaps the best known of his nine Masses.

Maurice Duruflé (1902-1986) composed his 1947 Requiem, opus 9, in memory of his father. Like Fauré he omits the Dies Irae and employs a mezzo-soprano and baritone soloist for, respectively, the Pie Jesu and sections of the Offertorium and Libera me. The music while based on themes from the Gregorian plainchant Mass for the Dead, has a distinctly contemporary, but individual character. Many consider it to be one of the most beautiful pieces of 20th century religious music.
Ticket prices:
£15
£1 for under 12s,
£5 for 12-16 year-olds
Special block booking rates for 10+ tickets, if booked in advance.